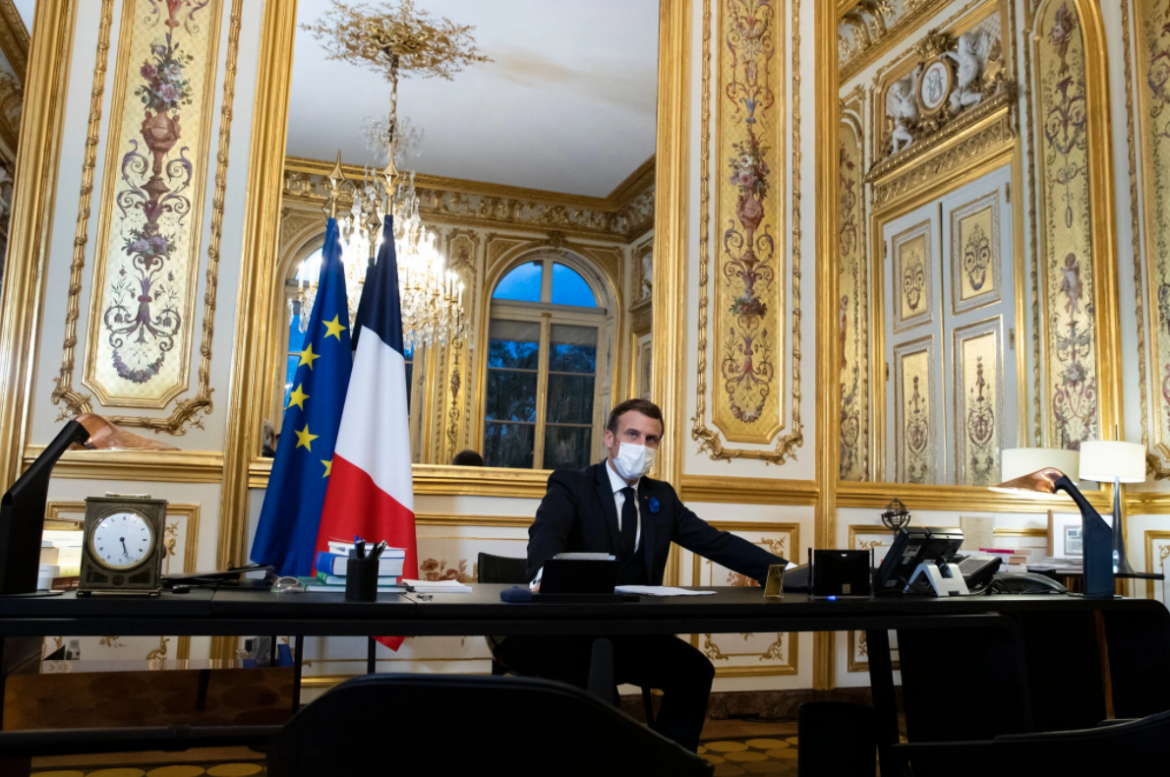 In a manner startling even to Americans now well-accustomed to politicians sparring with the media, President Emmanuel Macron recently accused English-language publications of “legitimizing violence” in their reporting on terrorist attacks in France.

The root of this complaint were the initial headlines and descriptions by both The Guardian and The New York Times following the October 22nd attack in which Samuel Paty, a middle-school teacher in a Parisian suburb, was decapitated after having shown his students cartoons of the prophet Mohammed during a lesson on freedom of expression. Rather than focusing on the teacher’s brutal killing, the New York Time’s headline initially read “French police shoot and kill man after a fatal knife attack on the street,” minimizing the attack while seemingly scrutinizing the police response. This type of rhetorical choice could be chocked up to incomplete information in a situation of breaking news or an American media accustomed to covering endemic police brutality and violence in a domestic context. However French government officials have instead framed these headlines and broader news coverage of the country’s counterterrorism measures as signs of hostile reporting fueled by ignorance of France’s “republican values,” namely laïcité and universalism.

In the November 15th interview with the New York Times, Macron argued that American journalists suffer from a “misunderstanding about…the French model,” given the United States’ history of segregation, followed by its pursuit of multiculturalism predicated on the “coexistence of different ethnicity and religions next to each other”. In sharp contrast, he emphasized the differences of the French universalist model considers any person regardless of their race or religion “first and foremost a citizen,” who shouldn’t be categorized or defined by any other metric, especially race or religion.

Macron’s comment, highly representative of French discourse on universalisme, is reminiscent of a 2018 spat between comedian Trevor Noah and Gérard Araud, France’s then-ambassador to the United States. After Noah commented lightheartedly on the African ancestry of much of France’s national soccer team following their World Cup victory, Araud wrote a letter insisting on the “Frenchness” of these men, stressing that “they were educated in France, they learned to play soccer in France, they are French citizens”. The seriousness of Araud’s response felt almost disproportionate given that these players obviously identified as French, and that Noah had never seriously insisted otherwise. Equally alien to American audiences was Araud’s categorical rejection of all “hyphenated identity,” descriptions of people involving their national or ethnic origins, as a threat to French national identity and tacit reinforcement of racist attempts to limit who is considered French. This reaction is indicative of the extreme sensitivity surrounding questions of race and citizenship in France. While both Macron and Araud may exaggerate the extent to which this worldview is incomprehensible to Americans, it is true that these ideas surrounding the sacrosanct importance of “the citizen” are profoundly different from most Americans’ understanding of identity and nationality. Just as a recent example, one could look to President-elect Biden’s cabinet picks and the way these have been communicated to the public; significant attention has been paid to the so-called “hyphenated identity” of appointed individuals.

If universalism is the ultimate goal of French republicanism, then laïcité—translated directly as secularism—is meant to be one of the primary tools in assuring equality among citizens. While religious liberty and the independence of religious institutions are indeed protected by the French constitution, religious practice is perceived as a deeply individual and private affair that shouldn’t be overly perceptible or infringe on the public sphere. Practically, laïcité was the impetus behind a 2004 law prohibiting the display of conspicuous religious symbols in French public schools including large cross pendants, headscarves or kippot. Critics of the legislation insisted that it infringed on citizens’ religious practices and placed undue burden on Muslims relative to other religious groups given the widespread practice of hijab by thousands of Muslims girls and the paucity of private Muslim schools. Defenders of laïcité, however, emphasized the need for strict delineations between religious practice and the public sphere, which includes public schools and administrative buildings, in order to preserve the right to secular belief.

Laïcité, or rather the media’s inability to properly understand it, was a cornerstone of Macron’s November 15th interview. In a sense, he is entirely correct that Americans have difficulty conceptualizing a form of separation between church and state that ultimately prioritizes the state’s strict neutrality towards religion at the expense of individuals’ religious liberties. The 2004 law described above would almost certainly violate the Free Exercise Clause of the First Amendment which has historically been interpreted in a way that “overprotects religious belief at the expense of secular belief”. This difference is hardly surprising given France’s historical conflicts between the Catholic Church and secular authorities over political control, a phenomenon not experienced in the United States. Additionally, the unusually high religiosity of the US has lent itself to a certain acceptance of overt religious practice that simply isn’t shared in France. As a result, the President and other officials have accused English-language journalists of viewing French society and laws through a prism of identity politics and American political norms that are entirely out of place in France.

Adam Nossiter, the outgoing New York Times Paris bureau chief, forcefully rejected that interpretation maintaining instead that “laïcité serves to conceal France’s problems”. President Macron has described many of these problems—terrorist violence, discrimination against women, rejection of state authority—as stemming from seperatisme, effectively the ideological inverse of universalism. While Macron frequently clarifies that separatismis not synonymous with Islam or with any singular ideology, he tends to exclusively address Islamist separatism and the “distorted Islam” it has engendered, including the veiling of young girls, widespread gender segregation and an overall alienation from broader society.

To address these tensions and appear responsive to the terrorist violence that has killed at least 263 people since 2012, Macron has proposed sweeping legislation to counter separatism. Crucially, it seeks to do away with France’s model of “consular Islam” in which countries like Algeria, Turkey and Morocco help financially support French mosques and send imams to preach in the country. In its place, the state hopes to certify and train imams domestically under closer state supervision by empowering the Council of the Muslim Faith (CFCM)—an organization itself creating by the government in 2004. Other measures in this proposed legislation would reduce the role of religion in public life by more closely regulating private religious schools and ending gender-segregated swimming at public pools. However, there is a certain paradox in this attempt to “to defend secularism with a plan based on the state’s intervention in religion,” especially as individuals’ religious practices—even those as banal as the consumption of halal and kosher food—are increasingly scrutinized. This inconsistent application of laïcité, even as Macron stresses the neutrality of the state “which never interferes in religious affairs,” suggests that the principle may function more as tool for advancing the policy preferences of the state than as a wholly objective republican value. Laïcité clearly doesn’t mean the same thing in all contexts.

Worryingly lost in these polemical debates on separatism, secularism and citizenship are crucial discussions on effectiveness and feasibility. If this proposed legislation is indeed meant as a response to pervasive terrorist violence, shouldn’t the conversation also focus on whether these counterterrorism measures are likely to succeed? While Macron has underlined the danger of foreign influence in his critique of “consular Islam,” it is worth considering the intensely homegrown nature of much French jihadi terrorism. Indeed, the Charlie Hebdo and Hypercacher assailants, as well as most of the November 13 perpetrators were French nationals, and radicalized primarily in domestic social groups rather than under the tutelage of foreign imams or by foreign terrorist networks.

There is also the related question of whether greater scrutinization and stigmatizing of all Muslims—despite the state’s best efforts to focus on “Islamist” ideology rather than Islam—will ultimately fuel radicalization and further violence. In an alarming episode, dozens of police officers detained four 10-year old students, searched their homes and collected evidence because of concerning remarks made by the children during a classroom commemoration for Samuel Paty. While the children’s insensitive comments likely required further investigation, the use of police force and the charges of “defending terrorism” appears a dangerous overreaction that could reinforce narratives of French Muslims being under attack.

Tellingly, the Minister of Education, Jean-Michel Blanquer, declined a request for comment on this incident specifically by invoking the principle of laïcité, arguing the topic has been sufficiently discussed. Yet, this episode involving the schoolchildren involved far more complexity than the state’s stance on secularism and noninterference in religion. This begs the question: at what point does laïcité go from being a legitimate articulation of state secularism to a ubiquitous justification for broad state intervention and even counterterrorism?

There is indeed a knowledge gap on laïcité by the American public, and it very plausible that American media suffer from a certain amount of bias in their reporting. After all, the Unites States’ unusually permissive stance towards religion has certain negative externalities including the strict limits on women’s right to abortion and discrimination against LGBTQ individuals, underlying the danger of insufficient protection of secular belief. And yet these very real shortcomings don’t preclude genuine inconsistences in the France’s invocation of laïcité or the possibility that laïcité is being used opportunistically by politicians to assuage public opinion. Moreover, given France’s mixed record on counterterrorism measures and present struggles reintegrating already radicalized individuals, it is imperative to genuinely reflect and debate the utility and possible negative consequences of any new policy.