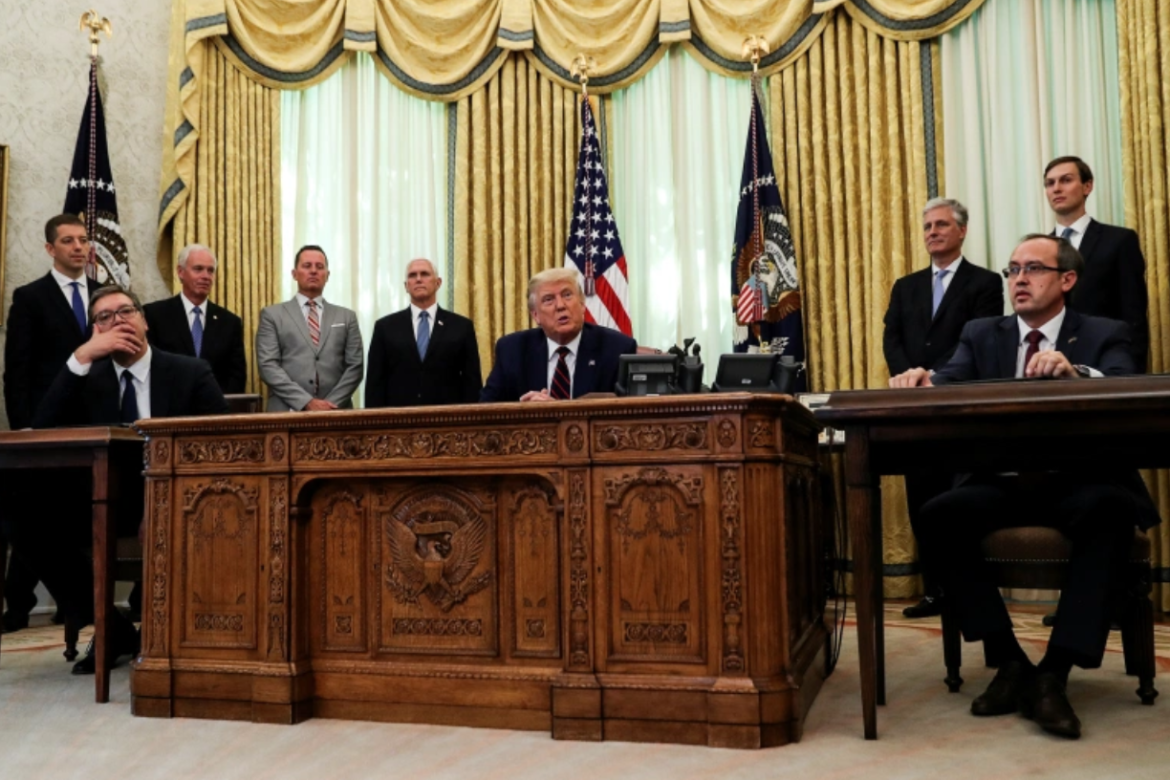 In late September Trump bragged on Twitter that he saved thousands of lives in Kosovo, saying that this was one of the biggest achievements in his career as President. These brags came after President Trump invited the leaders of Kosovo and Serbia to the White House with the main purpose of getting Serbia to officially recognize the independence of Kosovo, thus, establishing normalized trade relations between the two. But what actually happened in September that Trump started to brag so much, and why did pretty much no one else care?

To get to the September meeting, it is important to first understand the conflict between Serbia and Kosovo. Both countries are situated in the Balkans, bordering each other. However, up until 2008 Kosovo was not independent, being for decades under others’ control. Historically, Kosovo has been part of the civilization known today as Albania, but in 1913, after the fall of the Ottoman Empire in the Balkan, The Kingdom of Serbia took advantage of the poverty and lack of security to annex Kosovo. The purpose was for Serbia to fulfill its dream of becoming a big imperial superpower. The annexation of Kosovo was officially recognized by the international community in the Treaty of London where Western European superpowers and US decided to assign new borders in the Balkans. Albania was not allowed to have any delegation to represent its interests, even though it that point it had already been an independent state for one year. During the discussions, delegates of Western Europe superpowers were interested in splitting Albania in two and giving the southern half to Greece, and the other (Kosovo included) to The Kingdom of Serbs to form new alliances with regional powers. However, Woodrow Wilson, the President of US at the time, strongly disagreed and was able to negotiate that only parts of those two halves be given up respectively. This is how the annexation of Kosovo into Serbia became official.

The Kingdom of Serbia continued expanding in the region after invading Croatia, Bosnia Herzegovina, and Slovenia. It became known as The Kingdom of Serbs, Croats, and Slovenes. The diversity of ethnicities, however, produced a lot of tension and resulted in several uprisings. In 1928 the government decided to change its name to The Federal Republic of Yugoslavia in with the purpose of becoming a nation for all the people living in it. Yet, Serbia remained the center of the country and tensions carried on. During WWII Yugoslavia was invaded by both the Nazis and the Fascists and it suffered years of fighting. In 1945, after the end of war, Josip Tito came to power as Yugoslavia’s leader. Previously a distinguished partisan (a member of the armed forces organized to fight the Nazi occupation) Tito introduced a communist dictatorship system. To lower the tensions between the different ethnic groups, Tito decided to recognize Slovenia, Croatia, and Bosnia and Herzegovina as satellite republics to the central unit – Serbia. Kosovo was assigned as a province of Serbia. Through the years, tensions in the poverty-stricken and underdeveloped Kosovo continued and after numerous uprisings Tito decided to make Kosovo an autonomous province of Serbia in 1974. This allowed the province to have its own government, representing them in the central government of Serbia, and use Albanian language in education. On the other hand, it allowed Albanians to mobilize even further and seek independence through more uprisings. Tito died in 1980 and was succeeded by Lazar Kolisevski who in the context of the weakening of Yugoslavia and the Eastern Block implemented harsher policies including revoking Kosovo’s autonomy. In 1989, after years of economic and political crisis, the Kolisevski regime collapsed and was replaced by new one led by Slobodan Milosevic. Milosevic became a popular figure during the 1970s when as a politician he opposed the autonomy of Kosovo. The transition sparked demands for secession by various ethnic movements in Yugoslavia’s satellite republics and in Kosovo.

Albanians in Kosovo mobilized early, seeking to liberate the province so that it could re-join Albania, but Serbia successfully suppressed these independence efforts. In 1998, the Kosovo Liberation Army launched a guerrilla campaign against the Serb military. This was the beginning of a bloody war that lasted for one year and resulted in displacement and genocide of Albanian ethnics in Kosovo. In March 1999, however, a U.S.-led NATO intervention came to the aid of Albanians in Kosovo pushed the Serbian forces out of the province.

A consequent humanitarian mission designed to Kosovo recover from the conflict followed, but the Kosovar government had to commit not to join Albania, instead getting ready for full independence for the province. The reason was that western powers which helped in the intervention deemed it safer for the region to not end in future ethnic conflicts again over pieces of land.  Eventually, in 2008 Kosovo became an independent country which as of September 2020 received external recognition by 116 countries, but not Serbia who has also lobbied internationally against Kosovo’s independence.

Meanwhile, Serbia application for EU membership was conditioned by the demand it recognize Kosovar independence. Serbia has dodged that request and even toughened its tone toward the government of Kosovo. As a response, in 2018 Kosovo introduced a 100% tariff on Serb imports, making it impossible for Serbia to trade with Kosovo, an important trade partner for Serbian goods. The tariffs decision led to further deterioration in the bilateral relations raising fears of a second war which could damage the interests of US and EU due to the expansion of NATO and the EU into the western Balkans in the years since the 1999 war.

The purpose of the September meeting in the White House was for Trump to mediate the normalization of the trade relations between the two nations and even convince Serbia to recognize Kosovo’s independence. All those criteria were included in the initial agreement drafted by US officials, but Serbia’s prime minister refused to sign an agreement in which Serbia would have to recognize Kosovo’s independence. Trump then did not insist and removed the clause from the agreement. The outcome? Kosovo gave in to the pressure and agreed to resume trade relations with Serbia. Thus, Serbia gained back an important market and managed to walk all over Kosovo, once again.

That sounds like a policy failure, so why would Trump even brag about it? Well, it seems that Trump did not care about either Kosovo or Serbia. His immediate interests were in saving his foreign policy reputation and using this agreement in his election campaign. During his rallies he repeated many times that he stopped the killings of many innocent Albanians, even though that was Clinton’s doing because many Americans, and most of Trump supporters, are not familiar with the history of Albania. Actually, it is not clear that Trump even knew where the Balkans is until last year even though Melania Trump is from the Balkan region; when he wanted to kick Northern Macedonia out of NATO, he called the Balkans “the Baltics.”

Bragging was a weapon against his opponent, Joe Biden, who as a senator advocated for Albanians and supported the NATO bombings, actually helping to save innocent lives. Trump discredited Biden during the race, hurting the opponent’s image and stealing the “hero” crown. Not surprising at this point.

But there is a surprise in the deal. In one of its clauses the parties recognized Jerusalem as the capital of Israel and agreed to move their embassies there. Kosovo and Israel did not recognize each other prior to the agreement so this set the start of their political relations. It was extremely shameful for Kosovo, a state with majority of Muslim population, to recognize Israel. Not only because of the religion factor, but the history of Kosovo might ring a bell to you… hint: Palestine. On the other hand, Serbia disappointed the EU and its closest ally with agreeing to this clause. Why would Vucic, the President of Serbia risk all that? Seems he never noticed the clause and it came as a surprise after he had already signed as you may notice in the video. He was too caught up in destroying Kosovo that he hurt himself.

So why on earth was Israel included in an agreement between Kosovo and Serbia? Trump has made many mistakes in his foreign policy, and one was the decision to move the US Embassy in Israel to Jerusalem, recognizing the city as the new capital and legitimizing Israeli occupation of Palestinian territory. The American move – at that time the US was the only country to move its embassy to Jerusalem – was condemned by most UN member. Once again, Trump was trying to save his own reputation by trying to fix one of his biggest failures. The result? A much bigger failure. The only one who ever mentioned the event as a success was Trump himself. He Tweeted “I think they’d been fighting for 400 years, if you want to know the truth. But they’d been fighting for a long time. They want to make a deal, all of a sudden two months ago, [Serbia and Kosovo’s leaders] are in the Oval Office hugging and kissing.”