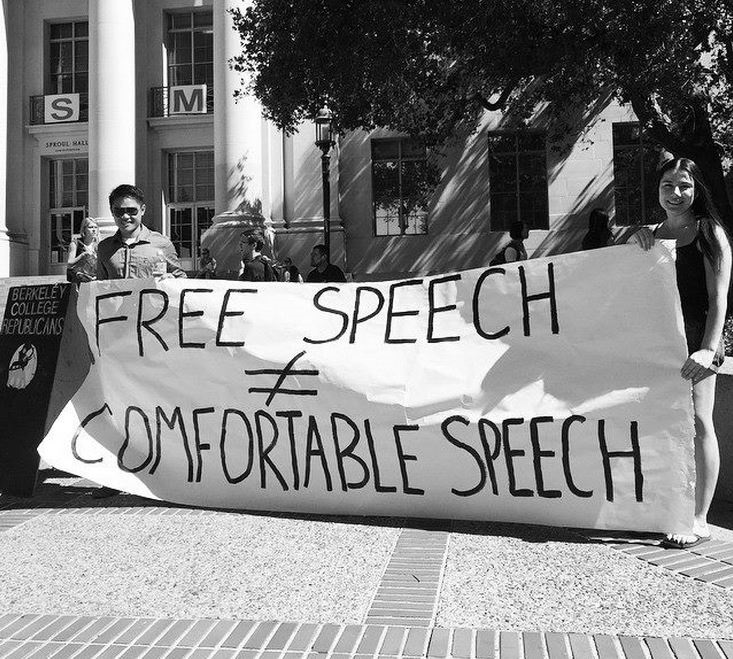 Freedom of speech is tied, deeply, emotionally to the American psyche. Enshrined in the founding documents, a right that is essential to democratic practice. We know this right is not absolute. You can’t shout “Fire!” in a crowded theater or violate copyright law. However, educational institutions, universities specifically, present a complicated and controversial test of free speech. Universities have long been flashpoints of radical thought and protest. In recent years, universities, which many conservatives claim inhibit free speech, have generated huge controversy. Many argue that it is the educational mission that make schools distinct. Education is impossible if some ideas are silenced. Even at Haverford, one key complaint raised by those opposed to the strike was that strike organizers “actively subdue[d] any sort of criticism of their movement.”[1] However, conservative claims about free speech on campuses overlook the genuine concerns of those on college campuses standing up to peers, preventing certain speakers, or fighting to fire professors. If we want diverse, but also inclusive colleges, we must be willing to place limits on speech.

When I say diverse, but also inclusive, I mean that it is not enough to bring students from many different ethnic, racial, religious, and socioeconomic backgrounds to a campus. We must also ensure that students have an equal ability to feel safe, feel ownership of their environment, and achieve success. Inclusivity is not about numbers, quotas, or access. Inclusivity means that barriers to belonging, on the basis of identity, are addressed.

Many overlook the importance of belonging for college students. However, belonging is critical to education, especially if one wants to achieve markers of collegiate success: new networks, extracurriculars, and academic honors. Much research has shown the connection between a sense of belonging on campus and factors such as academic motivation.

It is here that speech fits in. For all students to feel secure on their college campuses, we need limitations on speech.  Limitations do not mean we stop teaching or discussing controversial topics. We should also, like in the case of Haverford’s strike, be able to have discussions about issues of race and inequality, as well as the best methods to address these issues (conversations that strike organizers were willing to have). However, issues of humanity and who deserves it, gaslighting, and the denial of someone’s trauma are not important academic endeavors but harmful speech. Angelique Davis and Rose Ernst discuss how speech and writing that gaslights or tone polices marginalized people “compromises a valuable source of self-worth and self-trust.”[2]  Belonging is not possible when your humanity and self-worth are denied, or the voices of those who deny your humanity are amplified.

While I categorize these changes as limitations on speech, I believe they actually represent a crucial expansion of the right to free speech. When we allow students to feel a sense of safety and belonging in collegiate communities, we allow more people to share and participate in free speech. Speech has impacts, and it does not impact us equally. By allowing harmful speech, we are creating barriers for marginalized people to participate in conversation. This is not a mandate of illiberal thought policing but a vital step so that everyone can be a full participant in the university.

Speech is just one aspect important for students to feel a sense of belonging. But if we care, as so many claim to, about diversity and inclusion, we must first make our colleges safe for diverse groups of people. We must understand our own biases, beliefs, and language, as well as when and how our language is harmful to others.